Sarah Paulson and Holland Taylor looked absolutely gorgeous on the red carpet at the 2022 Emmys! Paulson was wearing a beautiful blue custom gown, while Taylor donned a chic black suit. The couple stuns together and are clearly very much in love. It’s so refreshing to see such a loving and supportive relationship in Hollywood! We hope to see more of Sarah and Holland together in the future!

Sarah Paulson turned up the glam as she attended the 2022 Emmy Awards in Los Angeles earlier on Monday evening. The 47-year old actress was joined by her long time partner, Holland Taylor for support and they both looked stunning wearing their respective ensembles which were fit for a queen!

Sarah took Hollywood by storm with her red carpet look. The gown itself was enough to turn heads, but she added a few finishing touches that really put her over the top. The sleeveless caped top added an extra layer of elegance, and the silver choker tied the whole look together. But it was her large, glittery ring that really caught everyone’s attention. It sparkled brightly under the lights, and it added just the right amount of bling to her outfit. Sarah looked like a true Hollywood star, and she is sure to be one of the best-dressed celebrities of the year. 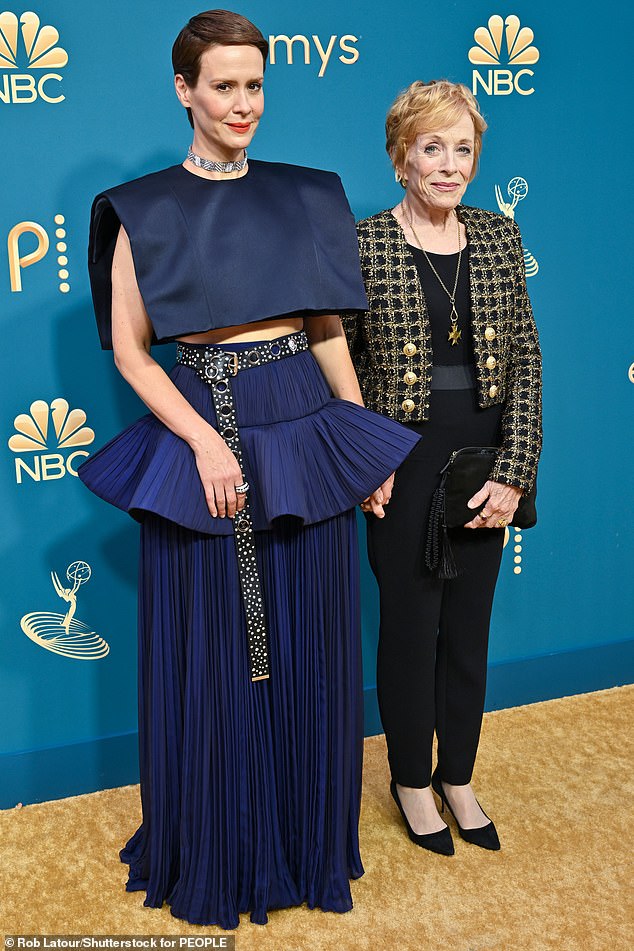 Holland’s makeup artist likely had a very easy job that day as the actress’s skin looked absolutely flawless. Wearing very little foundation and concealer, she let her natural beauty shine through. Holland did, however, add a touch of black mascara to her lashes and a light pink blush to her cheeks. Her lips were the only part of her face with a pop of color, as she wore a classic red lipstick. Overall, her makeup look was very simple but still managed to make her look gorgeous and camera-ready.

Sarah expressed her excitement at meeting other celebrities at the Emmys, saying that she rarely gets to see them except at events like this. She added that it was nice to be able to tell them in person how much she loves their work. Sarah has been nominated for eight Emmys and has won once, for her performance on The People v. O.J. Simpson: American Crime Story, in 2016. She expressed her hope that this year would be her second win.