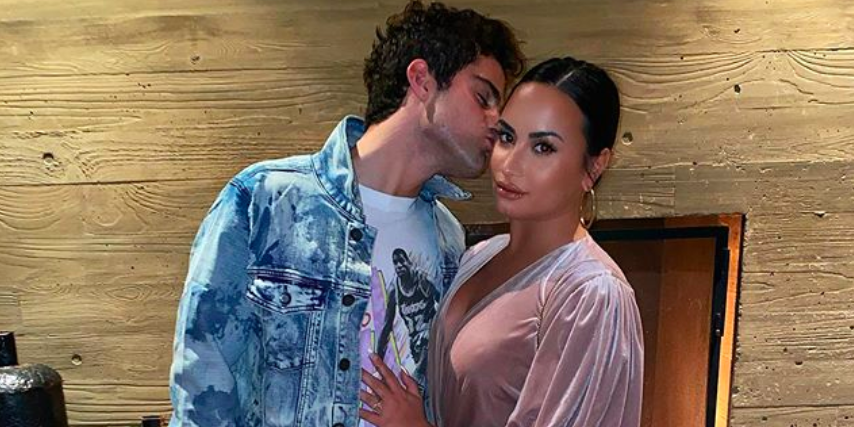 3 Times Demi Lovato DRAGGED Herself & Laughed About It!

we know you could use a laugh or two, we’re here to break down some of the best moments where Demi unapologetically trolled herself. It still might be hard to fathom at times, but we’ve come to learn that celebrities are just regular people and make regular mistakes, just like us normal folk. That said, it’s always refreshing when said celebrities are able to make the best out of a cringe situation and completely own their occasional shortcomings or wrongdoings. Case in point, Demi Lovato kicked off 2020 on a high note with

performances on two of the biggest stages an artist can step foot on AKA the Grammys AND the Super Bowl pre-show. 2020 was set to be the year of Demi’s comeback, buuuut unfortunately for celebrities, the good, the bad and the ugly of their entire lives are put on display for the rest of the world to witness and interpret for themselves. Demi seemed to be on top of the world with A-list performances, and shortly after,

falling fast in love with musician Max Ehrich. We won’t go into ALL those details, but if you’ve been keeping up with the news during quarantine, you’d know that the two got engaged… and then… un-engaged, which, honestly, seems like a LIFETIME ago!!! For weeks after the split, Demi remained noticeably tight-lipped but following the 2020 People’s Choice Awards, it’s clear she’s now able to laugh about her

past decisions. Demi was last weekend’s PCAs host and completely shocked fans as she poked fun at her engagement to Max in her hilarious opening monologue reminiscing on this past year. “But then COVID hit and everything shut down, so I did what everyone else did. I went

into lockdown mode and got engaged. I got into painting, photography, meditation, tested the limits of PostMates Unlimited.” Throughout her monologue, Demi touched on everything from the way her year started out to partaking in new quarantine hobbies, and even admitted

that she QUOTE, “binged seven seasons of Pretty Little Liars” just before joking that she “got un-engaged, then went looking for aliens in the desert.” She even shared coverage of the monologue to her Instagram story, so clearly Demi wasn’t afraid of a little self-roasting, and fans were LIVING for it. On a more serious note, this year marks Demi’s attempted comeback after relapsing and overdosing at her Hollywood

Hills home back in 2018. The relapse occurred after six years of sobriety. Demi checked into rehab immediately after being hospitalized, and then again in 2019, and was finally ready to make a full personal and professional comeback. But as soon as quarantine hit, she decided to

make the best out of a bad situation once again while appearing on a virtual reunion for her hit Disney Channel show Sonny With a Chance. The entire cast, including Sterling Knight, Tiffany Thornton and Matthew Scott Montgomery took part in the reunion and kicked things off

by catching up on what they’ve all been up to a month into quarantine. That’s when Demi dropped a major truth bomb on her whereabouts, which was met with some surprised faces and even more nervous laughter… “How’s everybody doing? What’s everybody been up to since the show?” “Everybody all at once… go!” “I went to rehab! Several times!” The cast continued to share memories about their time on the show,

when Demi touched on why she used to nap in between shooting scenes as her dressing room temperature was always set to 98 degrees. She continued to feed viewers with unabashedly open answers, telling her castmates QUOTE, “You guys! I had an eating disorder and was

underweight and freezing!” But Demi eventually got serious about her time in rehab as she credited her co-star Tiffany with being a constant in her life. She said, “When I went away to treatment for the first time, I remember it like, you were my biggest inspiration coming out of it.

You dealt with all of those pressures of being a woman on TV. I looked at that like, ‘I wish I had that, so bad.’” Nonetheless, fans once again praised Demi for how vulnerable she is with her fans, like this person who said, “I love how Demi is just so open about her life and just doesn’t care what people think.” Another person wrote, “I’m glad Demi has a good attitude about all the stuff that’s happened to her. It’s weirdly motivational!” And finally, allow us to fill you in on the viral fan-fiction story of Demi’s long lost twin sister Poot Lovato, who was

discovered by one Tumblr user a mere five years ago. This story is definitely one of those ‘if you know, you know’ kinda situations, and one that dates back to 2015, when a fan posted this photo to Tumblr which features a sketch alongside an unfairly-lit paparazzi photo of Demi fashioning what appears to be a shaved head and a mohawk. That’s when Poot began making her way around the Internet, and fans started

getting really crafty with her origin. The story that has since gone viral started with another photo of Poot with the caption, “Demi’s twin sister. She was locked in a basement her whole life. This picture was taken the first time she went outside. Her name is Poot.” Poot quickly turned into a household meme, and once making her way back to Demi, she was less than thrilled with the unfortunate camera angle. Demi

took to Twitter to air out her issues with Poot in a since-deleted series of tweets, writing, “Cool to see a shitty angle turn into a meme that circulates the Internet to people’s amusement ha. Oh and make actual ‘headlines.’” But just two years later, Demi seemed to have a change of heart about her long-lost twin sister, and FREED her from the basement. Just two days after April Fool’s Day, Demi tweeted a GIF of Poot’s

head moving across the screen, and fans collectively lost their marbles. Many were thrilled that Demi finally warmed up to the beloved Poot, and began dubbing her the “self-awareness queen”, as well as many other speechless fans who claimed Demi finally “let her out” and that “Poot has risen.” It’s no question Poot is a household name and a virtual icon of the ages, and her existence wouldn’t have been made possible without the incredible Demetria Lovato.

Demi Lovato DRAGGED Herself Laughed About It